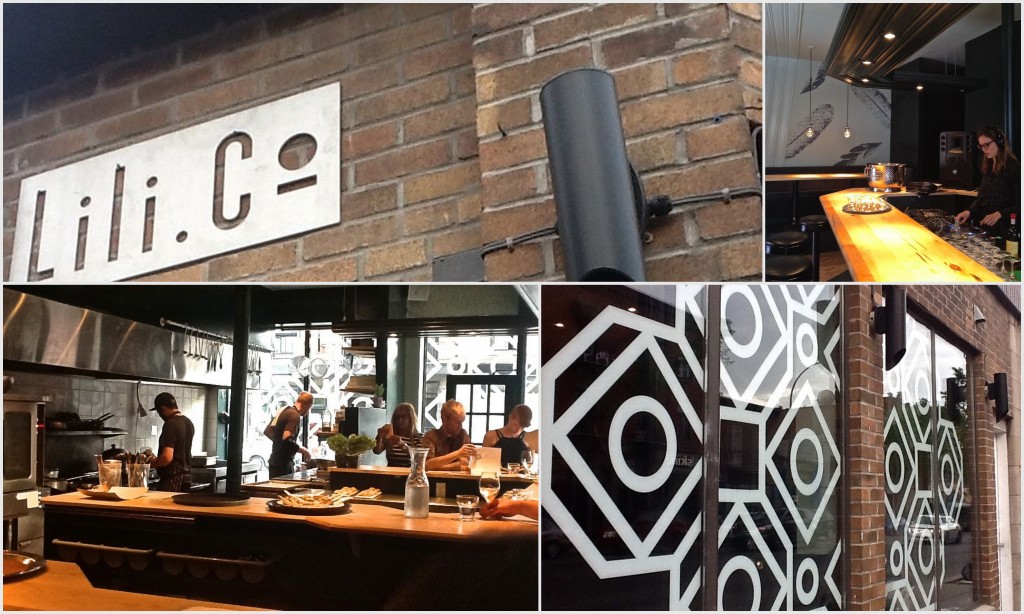 Around this time last year, I received a call from Éditions Transcontinental looking for a deleguate editor on a proposed chef collective celebrating childhood cooking. My first challenge? Pick 10 chefs from the many friends and colleagues in my address book. Given carte blanche, I decided to please myself by also choosing a few up-and-coming chefs who hadn’t published yet and needed exposure. Like David Pellizzari from Lili Co. bistro in Montreal’s famed Plateau Mont-Royal.

Born in Ontario, David also trained in Vancouver before moving to Québec, ostensibly for three years only, until he met food blogger Catherine Draws, a fiery redhead like him. Two babies followed, first his daughter Lili, then the bistro named after her.

In our interview for the book, David revealed that his stint in Vancouver had left him feeling a level of guilt at serving mostly the “noble cuts” of the animal prised by locals. In Montreal, where the European heritage has fostered a more adventurous spirit maybe, he was finally able to reconnect with the animal from snout to tail. Whenever I’m asked to recommend a restaurant that does offals the right way, not surprisingly, Lili Co. has been top of my list from the moment it opened, along with Maison Publique where chef Derek Dammann also works wonders with “lesser cuts.”

In the original Lili Co., located in a minuscule locale on Bienville Street, David quicky found his stride, drawing foodie Montreal to his table where dishes bursting with originality and freshness found favour with gourmets and critics alike. “We wanted to prove that you can work offals with a delicate touch,” explained Catherine as we chatted during Lili Co.’s official reopening on a trendier section of beleaguered St.Laurent Boulevard. Sceptics who don’t associate offals with subtlety might be intrigued to learn that my 9-year-old son swallowed every bite-size portion put in front of him, including the lamb kidneys and marinated tongue (see below for a look at the launch menu).

The new Lili Co.’s décor, shown above, is twice the size of the first iteration. Like its predecessor, it favours black walls and wood touches, with a cool vibe that should compel trendsetters to linger from cocktail hour on. Its menu du marché relies on the chef’s inspiration so much that you won’t find it on the restaurant’s website; a visit of the Facebook page might prove more insightful. For example, the current menu, but for how long, features smoked grey seal, fried veal brains, sweetbread steamed buns and lamb liver with bulghur and chickpeas. On the opposite end of the spectrum, a few vegetable-centric dishes — orange fiddleheads, blackened leeks, grilled asparagus — and exciting fish specialties like grilled Nordic shrimp, char with carrot gnocchi and roasted red snapper served with whelks, promise to thrill light-minded patrons.

As for the weekend brunch, it should continue to draw local gourmets who were already singing its praises on Bienville. With Aux Vivres and Pub Saint-Joseph a few doors away, no doubt about it, this corner of St.Laurent Boulevard is staking a bigger than ever claim on the trendy front… 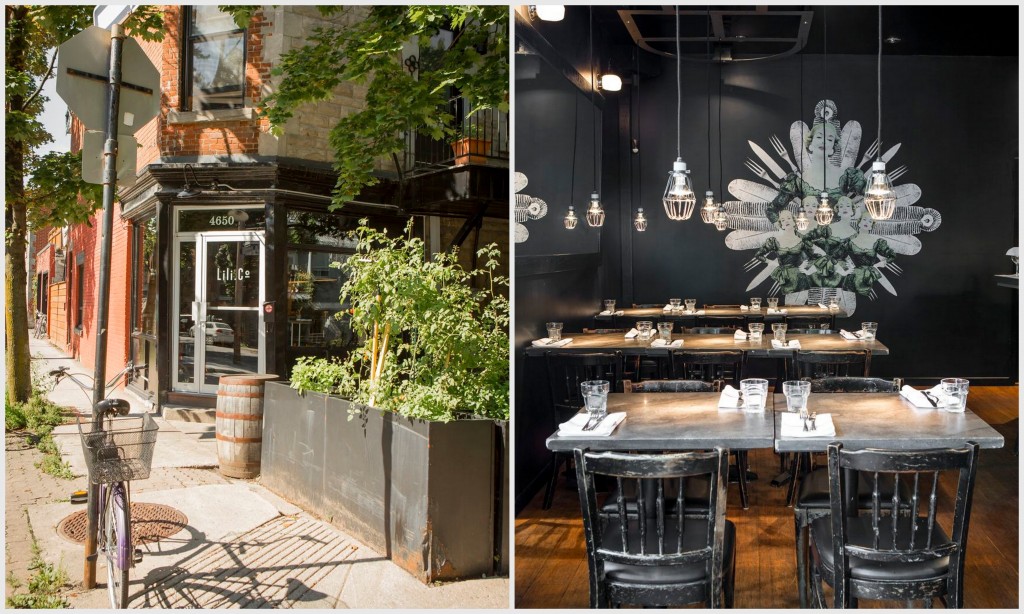 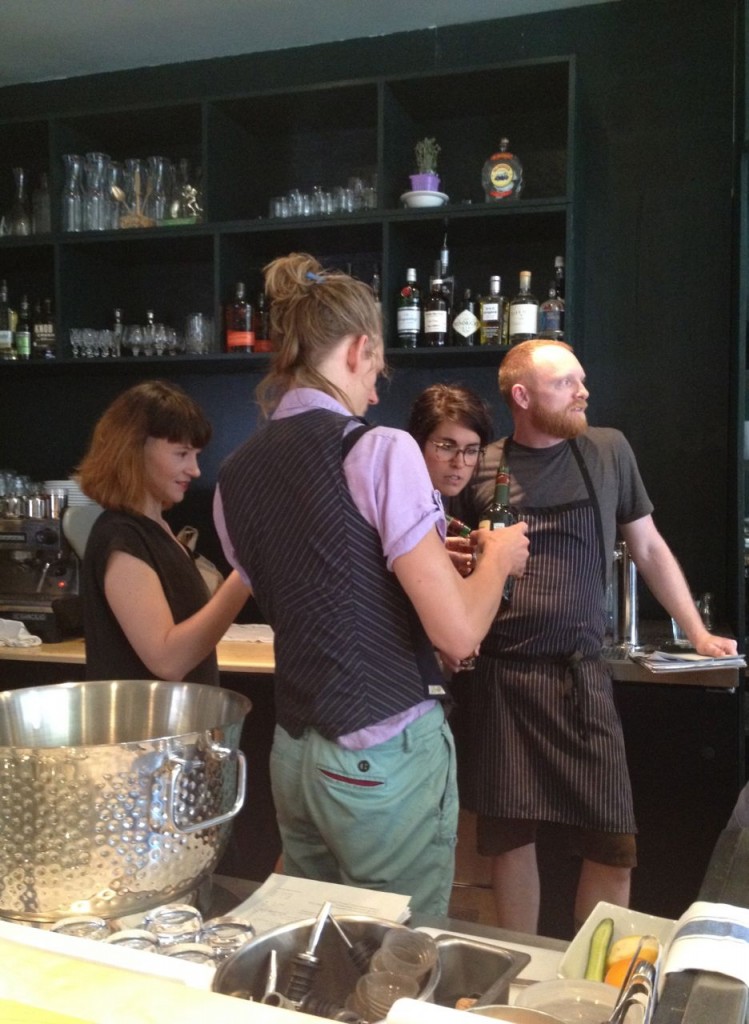 The team prepares for the coup de feu as friends and media gather for the official opening. 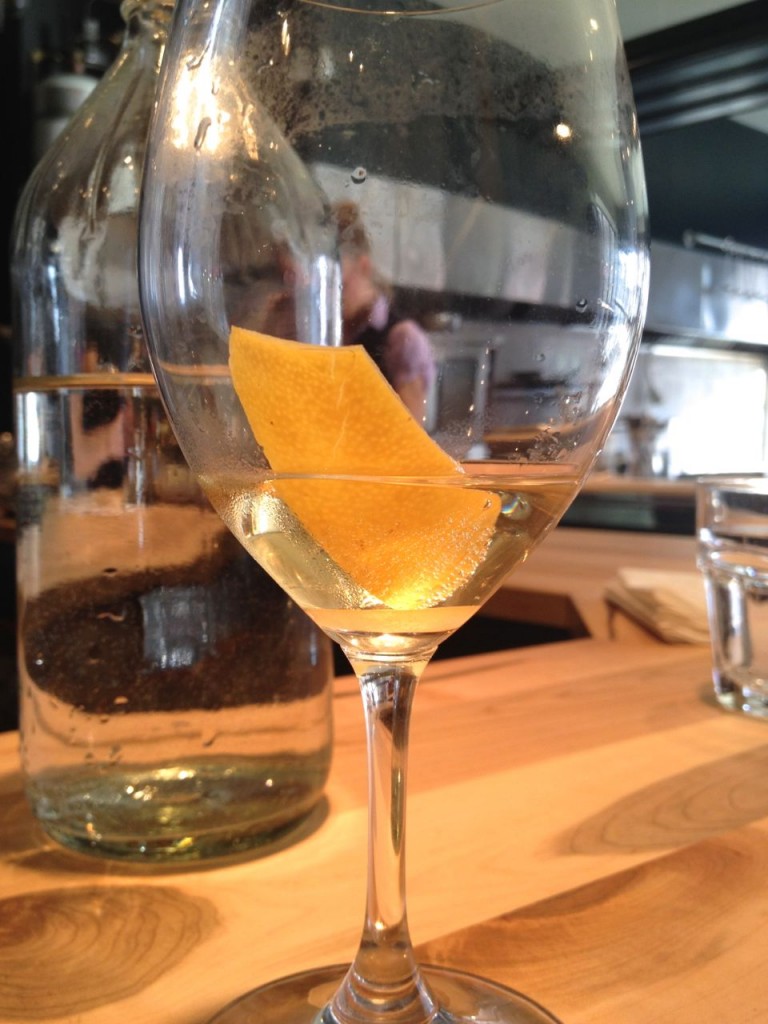 Champagne cocktail with bitters, sugar and zest: A barman will be serving up drinks from Thursday to Saturday. 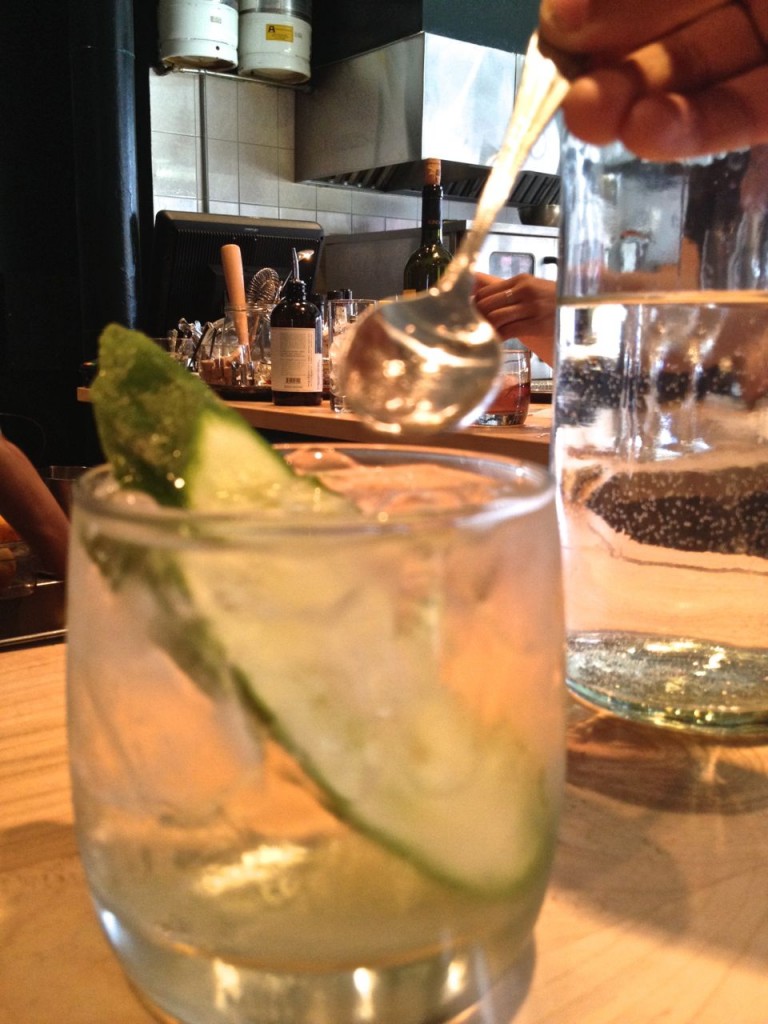 Gin tonic with cucumber, admittedly my drink of choice these days. 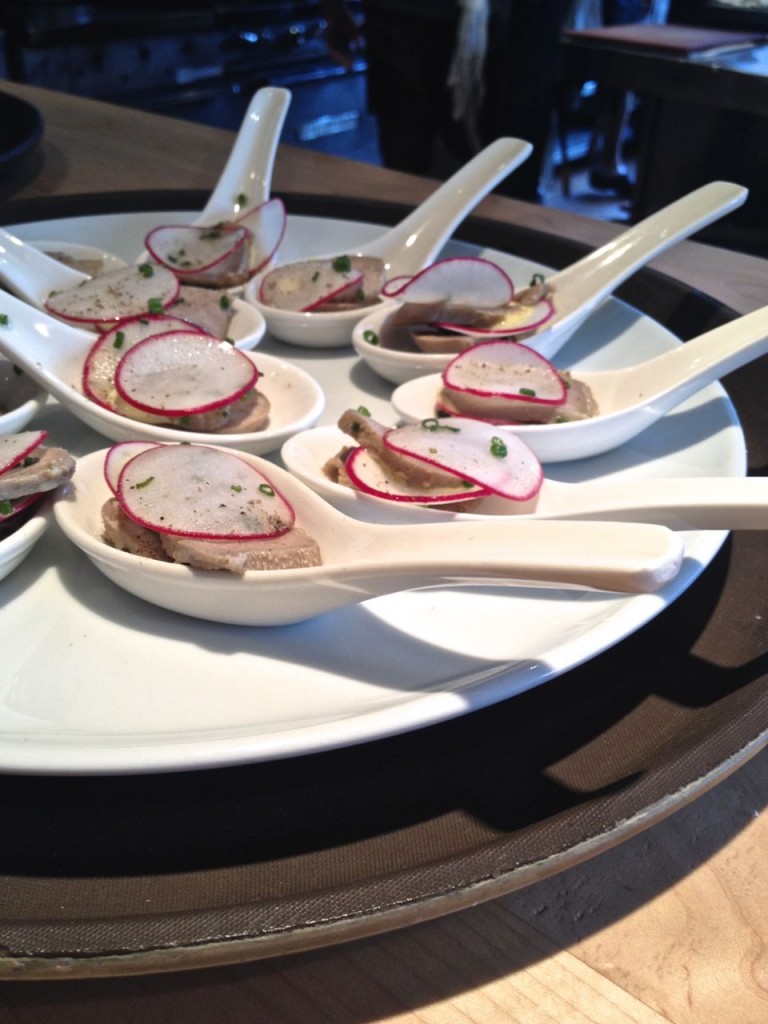 Ready to serve: A plateful of marinated lamb tongue with aioli and radish 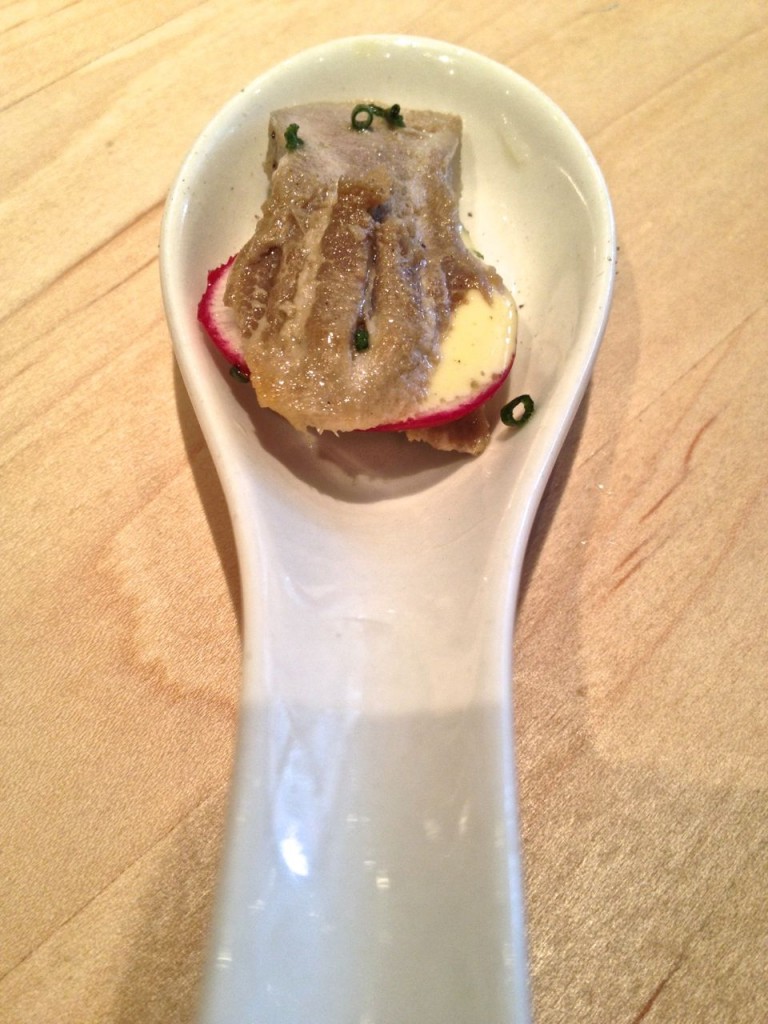 How to serve offals with the lightest of touches? This way. My 9-year-old asked for seconds, that says it all. 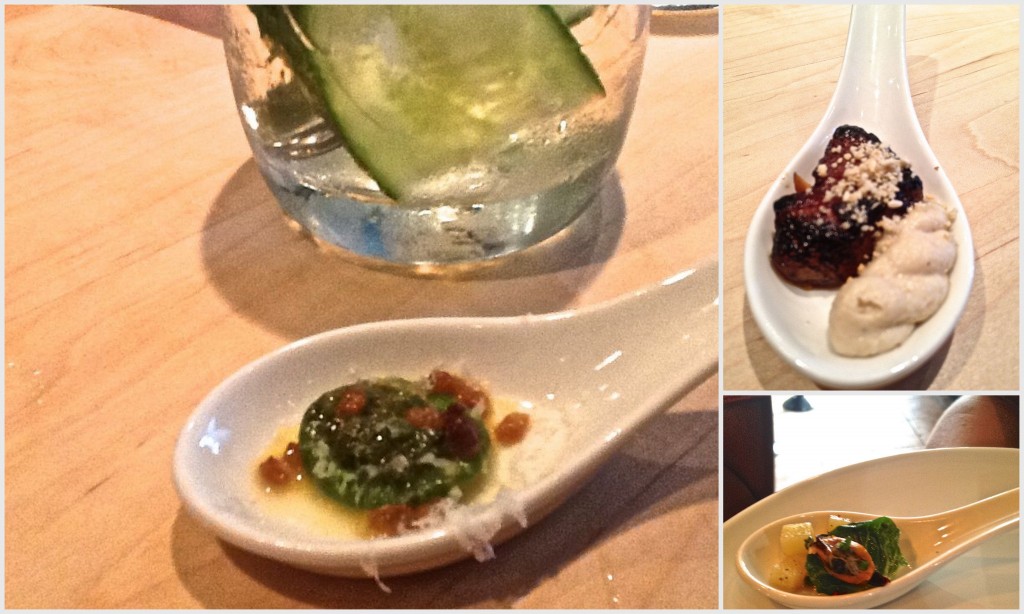 You’d like to try your hand at an original recipe from chef David Pellizzari excerpted from our cookbook La Cuisine de mon enfance? It’s here. 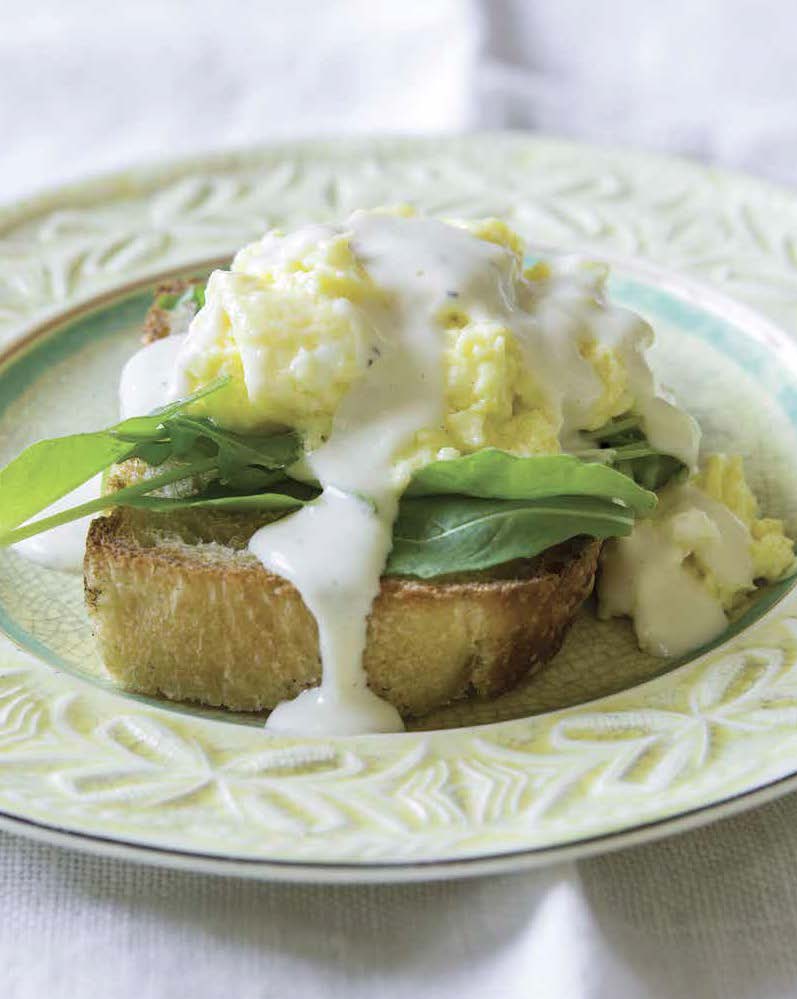 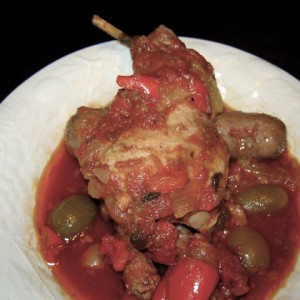 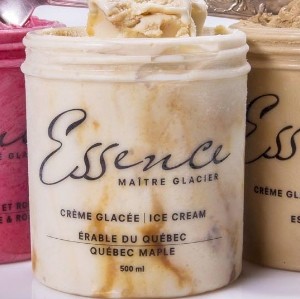 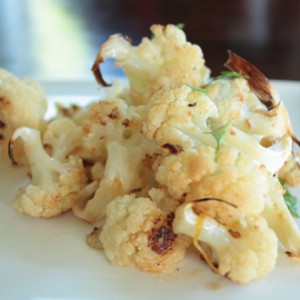